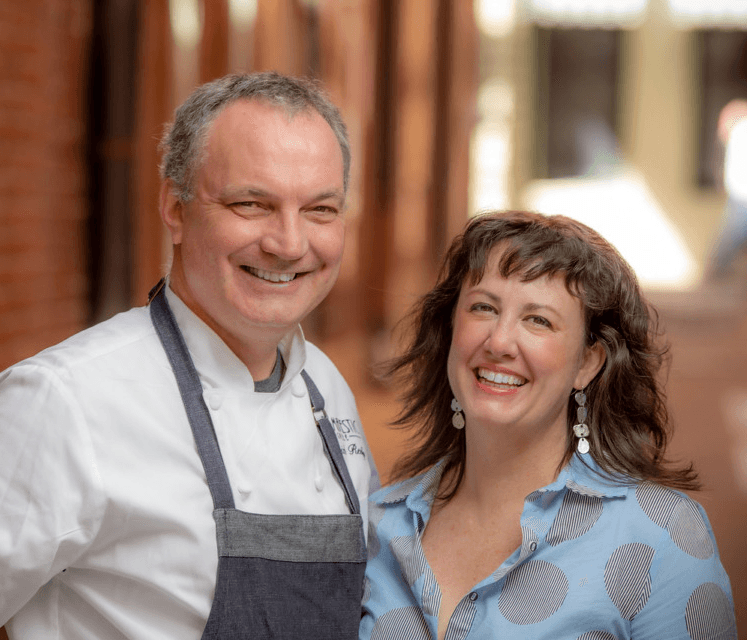 A more Memphis love story would be hard to write. The Blues brought Patrick and Deni Reilly together, literally. A chance introduction by the late blues guitar great Sean Costello who was on tour in Memphis, led to the pair to a multi-year courtship that included many concerts and a lot of meals in great Memphis restaurants. They married in a castle in Ireland in 2005 and just six months later, opened The Majestic Grille.

Since that time they have dedicated their interwoven careers to cultivating a Majestic family that reflects their shared belief that a restaurant career is a noble career. Restaurant professionals are just that, professionals, and the Reilly’s have not only committed to running their own business with that philosophy but have passionately advocated for the entire Memphis restaurant and hospitality community.

A native of Dublin, Ireland Patrick honed his culinary skills at a coveted apprenticeship in the executive dining room of the Guinness Brewery before embarking upon a culinary career that has taken him to New York, Boston, Orlando, and the Michelin Starred Inigo Jones of London. Dedication to approachable, classic food and a culture of gracious hospitality keep earning The Majestic and Chef Reilly recognition, including multiple Best Chef and Best Restaurant nods. A 2012 Congressional Proclamation issued by Congressman Steve Cohen honored Chef Reilly’s leadership in the culinary and business communities of Memphis and in 2019, Patrick was named Restaurateur of the Year.

A twenty five year hospitality and event professional, Deni has been honored to lend her talents to some of Memphis’s top organizations. As Chair of Welcome to Memphis, Deni ushered in the non-profit’s pivot from a hospitality training organization to temporary COVID relief agency, administering the distribution of nearly $1 million in direct grants to restaurant and hospitality workers impacted by the pandemic. Deni is immediate past chair of the Downtown Memphis Commission and sits on the DMC’s Design Review Board. The Memphis Business Journal named her a ‘Superwoman in Business’ in 2018, and a Power 100 Most Influential Memphian in both 2019 and 2021.

Whether it's dinner before a play at the Orpheum, or a working lunch, reservations are always in order.